Talk about losing the plot...

Talk about losing the plot...

This is from the BBC.com website. I think some of you have had problems accessing it before so I'll cut and paste. In short 600 million to build a floating bike path on the Thames.

In an inspired burst of think-outside-the-street strategy, a London consortium is floating an audacious plan to turn part of the River Thames into a nearly eight-mile-long, bikes-only pathway.

Aimed at reducing the ever-present risk of bike-meets-lorry encounters on the city’s traffic-choked streets, the so-called Thames Deckway would hug the south bank of the river between Battersea and Canary Wharf, with the midpoint at Millennium Bridge. The sleek, futuristic-looking bikeway – think Blade Runner meets Waterworld – was trial-ballooned by the River Cycleway Consortium. The group’s leaders are British architect David Nixon and entrepreneur/artist Anna Hill, working in conjunction with design/engineering firm Arup (of Sydney Opera House fame) and Hugh Broughton Architects.
The team has yet to reveal design details about just how the bikeway would float and what materials would be used, but the project, which reportedly will be privately financed, is expected to cost an estimated £600m (about $965m). Proponents say a flat-rate toll of £1.50 per biker per journey will help finance maintenance expenses.
The Deckway would feature access ramps and refreshment kiosks, as well as on-board sensors that, via satellite, would relay data to bikers about things such as traffic density and flow, as well as river and weather conditions. The bikeway would rise and fall with the Thames’ tides, and solar, tidal and wind energy would supply power for lighting and other needs.
If approved, the bikeway – which would accommodate 12,000 bikers per hour and clip the time it takes to cross the city by 30 minutes – could be completed in as little as two years.
The proposal is the latest in a series of ambitious plans designed to make London – where population is expected to grow by 12% in the next decade – safer and easier to navigate by bike. Late last year, for example, British architect and ardent cycling proponent Sir Norman Foster (the founder of world-recognized Foster + Partners and the designer of the so-called Gherkin tower), along with landscape architects Exterior Architecture and urban planners Space Syntax, unveiled a proposal for SkyCycle, an elevated bike path.
This 220km-long (136-mile), three-storey-high network of car-free bike paths, punctuated by 200 access points, would follow existing urban rail lines. While a total cost wasn’t announced, a short four-mile-long first leg reportedly carries a price tag of £220m. But supporters say that’s cheaper than building more roads.
In addition, London mayor and avid cyclist Boris Johnson, who’s pushing for a “cycling revolution” in London, is championing development of the “Crossrail for bike” project: 21 miles of bike paths that would be almost completely segregated from motor traffic. 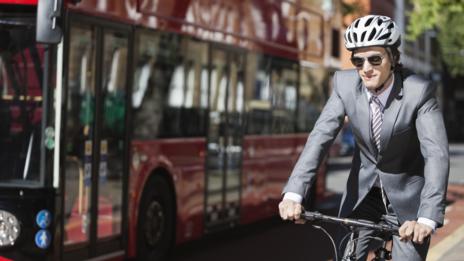 Safe biking is no idle matter in London, where bikers represent nearly 25% of rush-hour traffic in the central city. During a tragic, 13-day stretch in 2013, six bikers died on city roads. And between 2006 and 2011, the number of cycling casualties reportedly rose by 50%. Moreover, relative to motorists, cyclists in London account for a disproportionately high share of deaths and serious injuries.
The biggest obstacle to Londoners eventually enjoying a leisurely bike ride on the Thames is, of course, funding. Even though proponents of such projects point to numerous benefits, such as less pollution, a healthier populace, reduced traffic congestion, fewer biking injuries and decreased fossil-fuel consumption, the road to urban-biking Nirvana is littered with visionary projects that never got rolling.
Consider, for example, Toronto architect Chris Hardwicke’s Velo-City, in which cyclists would pedal through elevated glass tubes, or the $25m Veloway, a stalled proposal for an elevated bikeway in Melbourne, Australia, that would run alongside an urban rail line.
Other ideas have succeeded, though, such as the Hovenring, an elevated bike roundabout that hovers like a low-tech flying saucer in the Dutch university city of Eindhoven. Or the on-going development of 11 miles of bike-only “superhighways” in bicycle-happy Copenhagen, the unofficial biking capital of Europe, where 50% of residents commute by bike and bicycles outnumber residents.
Could the Deckway help London realise Johnson’s ambitions and wrest away the title of bike capital of Europe? Only time will tell if the idea sinks or swims.

Why don't they pay road tax if they use the feckin roads??

Today one slapped my window because i cramped her style, I will see her again and show her how to cramp somebody's style,
I better star keeping a folder

Watched him last night with the 3 wheelers